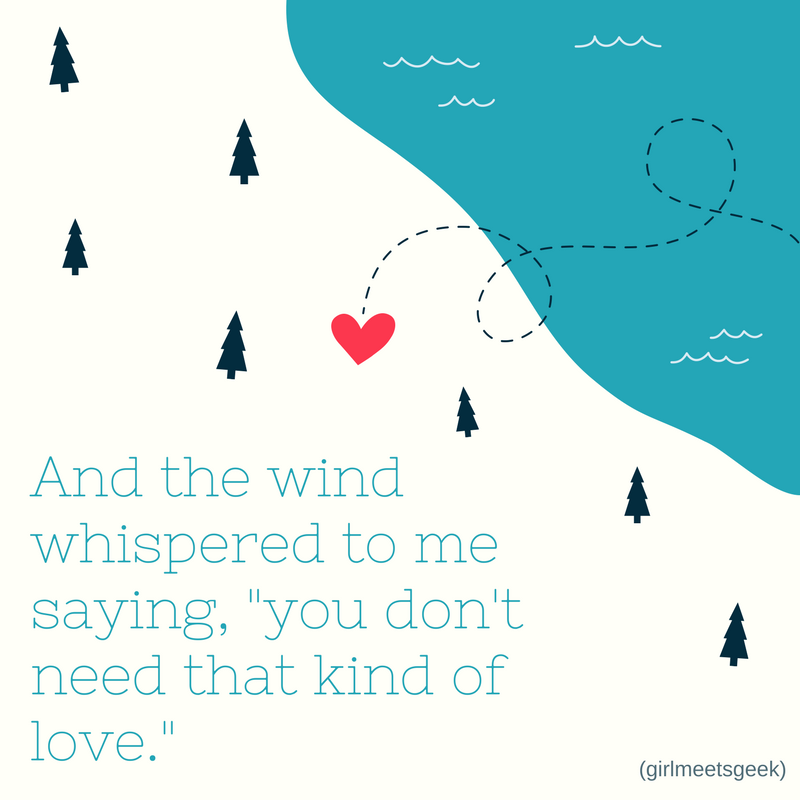 I held on so tightly that I imagined the rings my fingers left– first on his wrists and then on his ankles. I saw their defective half circles- unfinished, cut short by my inability to grow longer digits- fully wrapping around. I’m beginning to understand the space between the starting and stopping point; he was here and then, he wasn’t. We were happy and then, we weren’t.

“I can’t believe I found you,” he told me one night while we were sitting with our feet touching and our heads on the pillow. “I know you, but from somewhere else.” And it started like every doomed relationship starts: With a silent prayer that no one will get maimed and maybe… just maybe, something good would come to explain the pain and hurt of all the moments before. As a human being, I long for explanation- verbal assurances and retroactive roadmaps to understanding the past. If he loved me, perhaps it could forgive all the others who did not.

And that’s the trouble, isn’t it? I want to believe I’ve long left the fairytale or soul mate ideas behind. Find me a man that calls when he says he will, tells the truth and offers his hand when I am tired. I would probably hand over the keys to my world- without a second guess.

As he sat down, I only realized that the, “uh-oh!”  was outside my mouth when he laughed- a  big belly laugh that overtook our table and the next. His cinnamon brown eyes seemed to hold every pebble and piece of sand created.  And every time I looked, they changed in color just the smallest amount. Coffee to copper, ginger to mahogany. I remember that it took us almost an hour to order, because with conversations flowing into the other, we hadn’t really come to eat at all.

And yes, I understood that mathematically, the probability was slim- I looked to the equations of geographical location, sordid past histories and temperament. I learned something from game theory, after all, it seems. I practiced trust and patience. I’d like to believe I gave him normalcy in a strange land. And love, I hope I gave him love.

“You’re the only thing keeping me here,” he explained a couple weeks back. Work was almost completed and soon, he would leave and I would remain. Home was on the coast, but under the mountains. Flat, cornfield-covered Minnesota didn’t seem to fit with the way he spoke about the Sutter Butte peaks of California. I had only seen his home in pictures, while his feet walked each room of mine.

And that sums it up—almost perfectly. Exactly.  I opened up my heart in a way I hadn’t done since Andy- daring to encircle myself around someone without fear. I cleaned out drawers, and gave him room and he couldn’t stay and I couldn’t enclose who we were, with where we were both at.

I wanted to write about the adventures, but I’ve pushed them far out of my mind, or so I’d like to believe. The photos deleted from my phone hold a sense of emptiness- there was something in a folder marked, “J” once. It just all seems so improbable now- the walks at the park, the fancy dinners and swing dancing. I hate that I’ll forever think of the scar on my neck with the man who held my hand coming out of cancer surgery. I want to dismantle that sphere, too.

I once decided that the pain of the unfinished needed to be understood, and when I couldn’t understand it… I decided I had to reframe my perspective. I’ve lived many lifetimes with people, some shorter than the other. But in recent history, this was my favorite series of moments- completely powerless to the written word or any photo in my phone. Incapable and unqualified to be even described- like those burnt sienna eyes that still watch me from a smiling picture across the room.