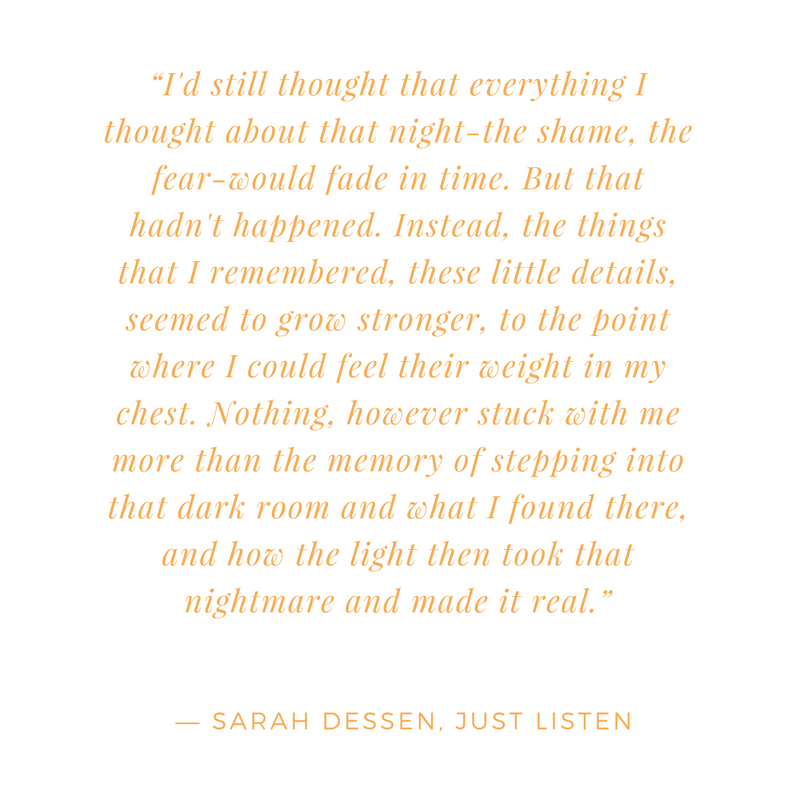 It’s been a while. I don’t often speak his name out loud. The sounds of the two syllables- the rise and fall of the opening and closing of his identity have given me pause these past few years. My strength came from taking what had happened to me and making it less likely to happen to someone else. But the problem, April, is that men like him are still raping women like me.

It’s a blur, and then it’s clear. My red and black checkered sleeveless shirt and my black Express pants. The bloodstain on my underwear and down my legs as I ran down the stairs to find friends in the fourth-floor bathroom. The incoherent babbling as I tried to tell everyone I was fine and not fine at the same time. The Freedom house and the walk home. My roommate was pounding on the wall for me to be quieter because she thought we were just “messing around.”

Do you remember the aftermath, April? He brought a note of apology to the 12th floor of Sheehan Hall, and we cried in the room off the hallway. You may not know, but I remember Sarah, the angelic R.A., who sat up with me the night before my parents picked me up. I can still feel the old, worn carpet of the floor- sleeping under Suz’s propped loft bed. I couldn’t stand to be alone- and in shame. I remember the notes people sent the week I was back home. And begging my parents not to make me go back to school. I remember it all.

I think back often to the words I was allowed to paint on the wall outside my room. The lyrics to Matchbox 20′s “Hang” still reverberate in my mind. The slow, steady beat of each chord. The bristles of my paintbrush married the wall in black and blue paint. Other girls happily painted hearts and flowers. Initials of roommates forever connected. I wrote about disappearing.

He cooked me dinner about a year after. We had steak. It was spring, and I was on campus, and he was in a shared house with friends. I told him I wanted to forget what happened because I missed the way it was before his apology, and we had our only class together, “A history of violence.” We learned that primates raped one another, and when the word came up, he looked straight ahead, and I looked down.

It was an awkward meal. He vented about his girlfriend’s problems, and I tried to reason with my anger. There was so much anger — I didn’t know where to put it all. We shared a meal together because I believed it was the best thing for our circle of friends. I ate the meal he cooked because I thought it showed my strength. I sat at dinner with the man who raped me- his fingers touching my food- and searing the meat. I didn’t forgive myself for years after. I felt like I simply ate myself alive that night.

I thought you should know that I place my life in two parts; before the rape and after. Dualism at its finest, there was Katie, and then… there was Kate.

I still cannot sleep with Christmas lights in my room- as that’s what stared back at me as I implored him to stop. Multi-colored Christmas lights lit the photo of the man I was dating- usually the last thing I looked at before I went to bed. In another lifetime, would that photo be a happy reminder of my now-husband? Everything was different then.

A strange turn of events, my life has taken. Scar tissue has properties that, while the skin is tougher, it grows cancer very, very, well. He pushed his fingers inside me, April. And then- as I screamed, he pulled them down and climbed on top of me. If you could do anything for me, April- could you tell me what he did after? My mind can’t recall the lost minutes between his torso’s weight on top of me and the sound of his zipper going up. I lost minutes in April and years to cancer. But somehow, after all this, I’ve still won.

Every year, I remember. Some days earlier than others. But I always, always, remember. Maybe this is the year I’ll pick up the phone and call you to say, “I’m still here. I just thought you should know.”