.: Gendersided: Did a clothing choice cost Elizabeth a job?:.

This afternoon, my Twitter was ignited in conversation about this photo from @AlanaBennett: 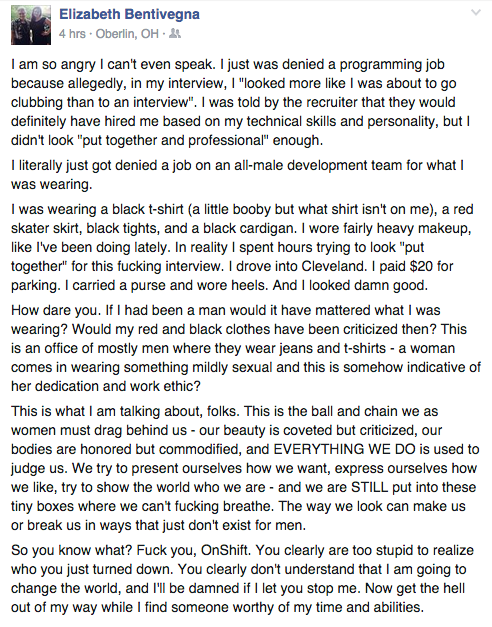 The state of job opportunities for females in coding or IT is abysmal.  Take a peek at this infographic by BizJournals.com:

The numbers tell one fraction of the story. As a former Director of H.R. and Recruiting, I can tell you: I’ve seen peers hold certain classifications of jobseeker, (whether age or gender) to different standards and I haven’t been afraid to call it out. No one should face discrimination in any interview or workplace, period. Discrimination is one of many elements contributing to the unwelcome attitude and ignorance about the ability for women to enter AND keep their careers in STEM- especially coding. Take #Gamergate for example. Disrespect abounds for women in computers, mathematics or science.

However, while Elizabeth clearly felt mistreated and seemed to have a point about how she might have been unfairly judged by her clothing– I can’t imagine suggesting anyone wear the outfit she described to an actual interview. There’s a smart median between a, “booby” shirt and a 1980′s power suit, (complete with shoulder pads.) That median shouldn’t involve a, “red skater skirt and fairly heavy makeup.” (Her words.) In truth, I tried to get on Elizabeth’s side, but I lost all respect by the first typed f-bomb.

Does this mean I’m not being an ally for women in STEM careers? No, I don’t believe it does. Does this mean I am not, “Leaning In?” Nothing of the sort. What this equates to is that Elizabeth’s choices were unprofessional. The recruiter should have given Elizabeth a heads-up about what might be appropriate attire to wear to an interview, so she felt adequately dressed and prepared. But, that’s where the (probable) fault of the recruiter ends. And, if the fault didn’t end there, there’s absolutely NO reason to bash the company publicly- where future hiring managers can see your attitude and verbiage.

I have no doubt Elizabeth will get 15 minutes of fame, (in the Buzzfeed, or Huffington Post variety.) What she may not receive, is other job offers or interviews- all gender aside.