.: Fallacies and Lies :. Or, Matt Walsh Is Wrong On The Internet… 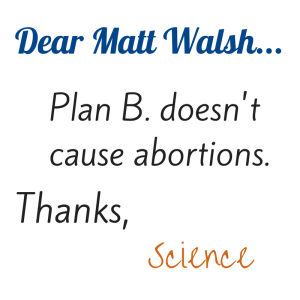 “A.D.A.M., the firm that writes medical entries for the National Institutes of Health Web site, deleted passages suggesting emergency contraceptives could disrupt implantation. The Times, which uses A.D.A.M.’s content on its health Web page, updated its site. The medical editor in chief of the Web site for the Mayo Clinic, Dr. Roger W. Harms, said “we are champing at the bit” to revise the entry if the Food and Drug Administration changes labels or other agencies make official pronouncements.” (New York Times, 2012)

Dear Matt Walsh, I am a firm believer in a right for an individual to speak their mind. But, the almighty freedom of speech comes with steep consequences. Lying to your readers, while pretending those thinly-veiled opinions are truths, does not make you a more Godly human being- it makes you a hypocrite.

There has been a battle about women’s bodies since the beginning of time. Women are still viewed as property in many areas of the world, and what can only be described as, “We literally went back to the early 1900′s from 2014,” the government has decided that my birth control coverage is not a right, but rather an employer-based decision.

Why does my employer get to decide what freedoms I am allowed to have? You state, it’s my OWN job to get my birth control paid for. And, I would happily do that, if I hadn’t lost my uterus, ovaries, cervix and the top half of my vagina to cervical cancer. You see, I’m a HPV+ cancer survivor that also carries the HER and BCRA-2 gene mutations. I don’t need birth control anymore, but I did once and I couldn’t receive it. I am one of many women who were stuck in the loopholes of non-coverage before the Affordable Health Care Act. You can read up on my journey to get coverage and lobby on Capitol Hill here, here and here.

Last April, my insurance, Health Partners refused to pay for a screening and scan. In fact, they refused to pay for ANYTHING to do with my cervix. They said even with my health they would only pay for one pap smear a year and I had already used that with other insurance. (In stark contrast for my condition- I receive 4-5 paps a year, plus scans, biopsies and more.) They said my “pre-cancer” and “cancer” were pre-existing conditions. This meant, I had to pay $2k or more out of pocket for each check-up. I couldn’t afford a hysterectomy to make it all go away. I couldn’t even afford to keep my body healthy enough to have another baby I desperately wanted.

Why is it only the woman’s responsibility to protect herself from an unplanned pregnancy? And, why when so many clinics are closing and cancer screenings are being affected are you so against Planned Parenthood? You claim to want women to go get birth control, “on our own,” but you want to defund and take away opportunities for women to find affordable birth control. You went so far as to call one of the only choices left in most rural communities, Planned Parenthood, a lie.  Oh Matt Walsh, just no.

“Planned Parenthood lies as a matter of policy. If you put a Planned Parenthood executive in a lie detector, the thing would probably explode. Honesty from Planned Parenthood is like a New York Jets Super Bowl appearance – it only happens once every 50 or 60 years… Out of all the lies that stream like rivers of blood and sewage from corporate Planned Parenthood, the worst, most brazen, most obvious, and most influential has been this one: “Only three percent of Planned Parenthood’s services are abortion.” (Matt Davis, 2014)

Your words are a stark contrast to FACTS presented by investigative reports on Planned Parenthood. In case you needed a credentialed site to review abortion facts, I highly suggest the Guttmacher Institute. 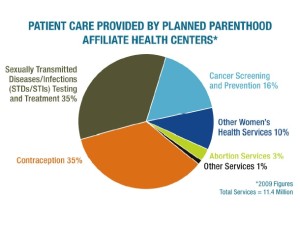 With community clinics and Planned Parenthood locations closing nationally, where will women go? In Texas, Senator Wendy Davis made headlines to bring attention to her female constituents barriers to affordable birth control access. 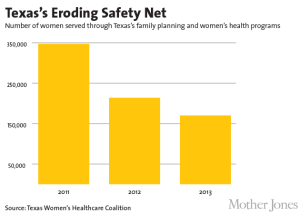 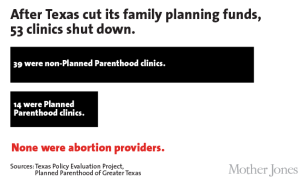 Matt, you brutally attacked Senator Wendy Davis in several posts,  but none worse than this:

“You were like Joan of Arc, Mother Teresa and Harriet Tubman, all rolled into one. Except they stood for courage, righteousness, truth, peace, and love, while you stood for the billion dollar abortion industry. They protected and defended life, while you protected and defended your right to destroy life. They faced grave danger, you face the adulation, admiration and campaign donations of the media, Hollywood, the president, pop culture, the abortion lobby and millions of Americans. The parallels are striking.” (Matt Walsh, 2014)

The state of Texas is in dire need of safe family planning services. The Planned Parenthood locations in Texas served 50% of individuals and half of all pregnancies were unplanned in 2011, and 1 in 3 women of childbearing age lacked health insurance. Certainly you can see where this is going. If you want employers to have the freedom to cherry-pick what coverage employees are allowed, then you must also be well-versed in the fact that better family planning services offer a boost to the economy and individuals. Where will women go, if Planned Parenthoods are defunded and you don’t want your tax dollars paying for abortion services, or a pill that you wrongly classify as an, “abortion pill”? The morning after pill, does not cause an abortion. In fact, in credentialed, separate studies, it was found the Morning After Pill, (or Plan B,) did not induce an abortion or miscarriage. (See here and see here.)

I’m surprised you can keep it all straight- with your hatred for abortion, the morning after pill, Wendy Davis, Planned Parenthood AND, women. (I too, haven’t forgotten that you reminded me I am not equal to a man.) After all, you said, “Men and women are not equal. They are not they same. There’s really no avoiding this fact.” For your sake, Matt Walsh, I hope you realize how wrong you really are.