{Gardasil} Political Mis-Information Harms The Cause

The first thing I do when I read any news article in my google alert feed about Gardasil, is to immediately look at the source, not that I discredit any small publication, but we must remember that absolutely EVERY form of media has an agenda. As a parent, I do my best to research both sides of any issue to prepare myself to make better choices. I find the systematic misinformation and failure to provide clear, consise information about most HPV-related issues to be an astounding disservice. Misinformation comes from both sides, both the pro and the anti-vaccine camps.

This week, news broke about an un-named young women whose ovaries were damaged and she was left infertile, thanks to, (according to one article,)  “Merck conveniently forgetting to research the effects of this deadly vaccine on women’s reproductive systems. “ With the inherent risks of new vaccines, and a lack of a 10-year study for Merck’s Gardasil and its sister vaccine from GlaxoSmithKline’s Cervarix, I highly doubt that they’d immediately assign blame onto themselves for “forgetting” such an important step. The news was featured on the following sites, after an abstract was released from the British Medical Journal.

The British Medical Journal, (BMJ,) is owned by the British Medical Association, (BMA.) The BMA’s stated aim is “to promote the medical and allied sciences, and to maintain the honour and interests of the medical profession.” The most important point to remember, that causation does not  equal correlation, even in science and medicine. However, the quote from the journal below is scary and timely, considering many more schools are adopting the vaccine as mandatory for both sexes.

“Premature ovarian failure in a well adolescent is a rare event. Its occurrence raises important questions about causation, which may signal other systemic concerns. This patient presented with amenorrhoea after identifying a change from her regular cycle to irregular and scant periods following vaccinations against human papillomavirus. She declined the oral contraceptives initially prescribed for amenorrhoea. The diagnostic tasks were to determine the reason for her secondary amenorrhoea and then to investigate for possible causes of the premature ovarian failure identified. Although the cause is unknown in 90% of cases, the remaining chief identifiable causes of this condition were excluded. Premature ovarian failure was then notified as a possible adverse event following this vaccination. The young woman was counselled regarding preservation of bone density, reproductive implications and relevant follow-up. This event could hold potential implications for population health and prompts further inquiry.” (British Medical Journal)

To any parent, the realization that the medicine given to our children has consequences as well as benefits is a sobering thought. Often, the implications and education of understanding everything about what we are doing is not only impossible, but GOOD information is hard to find. Look at the below that I just found on Facebook: 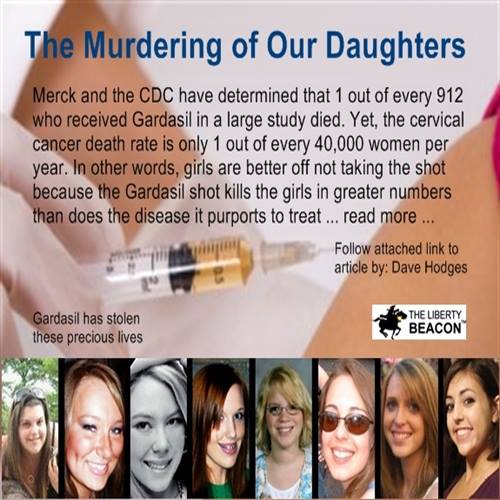 Those are fighting words. Look at the caption and the faces of the young women who have passed. It’s very hard to not want to read more and pass the message on for the sake of preventing future death or harm. But this is the problem, the statistics and facts in the photo are absolutely incorrect. The photo’s author, Dave Hodges hosts a show called, “The Common Sense Show.” He discusses everything from “Big Pharma” to immigration and everything in-between. The logo on the photo is The Liberty Beacon, which published an article, written by Hodges. The Liberty Beacon seems to be an advocate for alternative media sources. I’m a huge believer in reading non-network news. (I often find better articles away from CNN, FoxNews and MSNBC.) However, some media outlets are proving untrustworthy with poor sourcing and changing non-facts, (perceptions) to facts simply for hits online. While I don’t have time to wonder whose news is legitimate and who is pushing their own agenda, I do have time to show you where you can find completely different statistics, from accredited sources about the HPV vaccines.

One of the most prolific studies on the Gardasil vaccine belongs to the Journal of the American Medical Association, (JAMA.) This study circulated in 2009 and supported the following facts:

Many claim that the CDC is giving false information because they are supported by Merck and GlaxoSmithKline, themselves. While I won’t deny that I have wondered, I do know this: Everything we put into our body has benefits and detriments. We aren’t currently funding HPV at the level we should be, concerning it affects over 80% of our population. I am continuously blown away by our acceptance of dumbed-down statistics in place of true thought. HPV doesn’t just affect cervical cancer. In fact, it’s being studied to better understand other cancers, like throat,  esophageal cancer and anal cancer varieties. HPV affects so much more than we currently understand. And, the vaccine is NOT the only method of prevention, it’s simply another tool in helping our body fight back against cancerous cells. Along with not smoking, eating the correct foods and exercising, the HPV vaccine is a bonus, in the form of medicine. While the vaccine has risks, almost all vaccines do.

So far, there’s not much evidence to point to the fact that Gardasil has actually been the ONLY cause of death for any one of those precious young women. As a parent myself, I’d be hard-pressed to find the culprit of my child’s killer and nail them to the wall. However, this isn’t that easy, especially when we’re barely funding HPV research, itself. That’s possibly, the scariest part of all. I’ve read the website, TheTruthAboutGardasil.com and I find it heartbreaking that we are scaring others from educating themselves more about the virus or the vaccine. In fact, usually when someone asks me to present or speak about HPV, I make sure it’s not vaccine-related, because there is so much more for us all to learn, other than debating about a vaccine. We should try to understand the VIRUS, first.

We know HPV plays a part in many cancers, but we haven’t yet unlocked the code. In the meantime, we’re spreading misinformation about a tool that can actually help our youth be better prepared to dodge the virus and ultimately, the cancer. Before you make your decision on whether you are going to vaccinate your child, please consider doing your own research, and actively seeking out the opposite to what you believe already. Start with Forbe’s article, “Here Is How We Know Garasil Hasn’t Killed 100 People.” Then check out, TheTruthAboutGardasil and everything you can get your eyes and hands on, in-between.

Bring your findings to your child’s physician and have a heartfelt discussion. If you choose to vaccinate, you’ll have educated yourself correctly about the risks and benefits. If you’ve chosen to not vaccinate, you’ll feel at peace with your decision, knowing you actively sought-out information from both sides and asked the right questions. Remember, HPV is an auto-immune disorder that leads to cancer, but also causes infertility and compromises the body’s ability to fight other diseases,

Educate your daughters to ASK more questions at the doctor and to better understand what an abnormal pap smear means. For a great toolkit for young women, head over to http://www.beenthererockedthat.org. Let’s educate ourselves and our daughters early to better understand HPV and the effects of an abnormal pap smear, first before we spread a false dialog about vaccines.