Update: I received one of the kindest emails this afternoon from Charlene Briner, Chief of Staff for the MN Department of Education. I asked permission to quote the email. Charlene emailed:

“I really appreciated your thoughtful post yesterday about MDE’s decision to pull our PSA’s from Clear Channel.  It really was a no-brainer business decision.  We didn’t ask for an apology, a change in programming or content or any other consideration. We simply asked that the PSA’s stop running and our logo be removed from Clear Channel’s station pages due to an emerging mismatch in values and message.”  - Charlene Briner, Chief of Staff, MN Department of Education

If hindsight is 20/20, today’s Twin Cities gaffe on Twitter is a look into the future of social media and reputation management. As you may or may not know, morning co-host Dave Ryan from KDWB decided to tweet out insults to various local high schools and colleges. The Pioneer Press reported that Clear Channel, (KDWB’s parent company,) was under fire from the Minnesota Department of Education. The MDE, (MN Department of Education,) decided to pull all advertisements from Clear Channel affiliated stations. Brenda Cassellius, (State Education Commissioner,)  released a statement:

”I find it troubling that anyone — especially an adult — would use social media or any platform to make light of serious issues facing young people or to perpetuate stereotypes. This is the kind of behavior that we teach our children is wrong.”

Your brand isn’t what you say it is, it’s your perception. If Dave is perceived as insensitive and rude to local schools, the DOE is taking the necessary steps to disassociate themselves with Dave’s label. However, this type of behavior is nothing new to Twin Cities radio. Earlier in July, I tweeted my own lament with local radio and the boundaries that are crossed on a daily basis. I was only mildly shocked when KS95′s own Staci Matthews joked that she’d trade her right to vote for an iPad. My beloved Cities97 started losing its own identity in 2011 and a few weeks ago, I noticed that their playlist almost perfectly aligned with KDWB and KS95′s. Clear Channel is all the same music,  the same personalities and frankly, none of it is done very well. I can’t imagine Clear Channel will need to do more than a small statement about how they were saddened to see Dave’s tweets, and the fact they do not represent the channel or the subsidiary of the radio giant. Fixed, done and forgotten about, ad nauseam.

While making fun of teenage pregnancies, drug use, and basic high school debauchery are bottom of the barrel material for any local comedian, most comedians  would understand the need to not make fun of their sponsors. Sponsors pay for the cost of business and business cannot operate without meeting advertising targets. With the DOE being so vocal about pulling their ads, I wonder if other advertising clients will follow suit. But probably not, remember- radio advertising still works.

Brenda made a great call, but my hope for it actually mean something fell in between trying not to think about it and reading the Pioneer Press’ poll.  I found it interesting, that most people believed the DOE over-reacted. In the  poll, a growing majority of those answering believed that although the tweets were unprofessional, there was no reason to pull advertisements. Because we’re used to it. It has to be controversial to be hilarious, right? 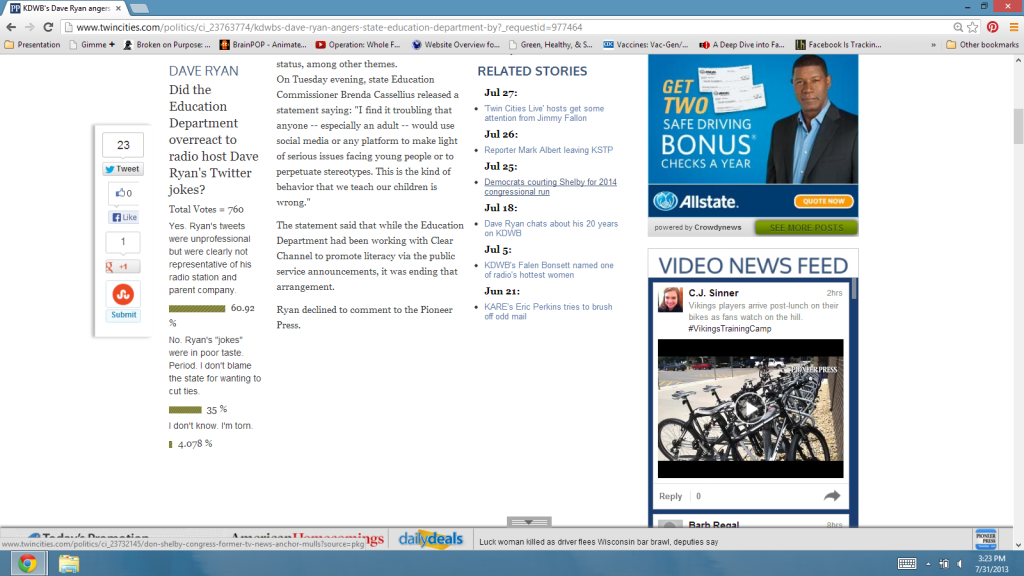 Dave hasn’t tweeted for a few hours, and I’m beginning to wonder if Clear Channel is going to take other measures or actually start a precedent. In either case, it’s an interesting study in reputation management and affiliation, but the hype is clearly not warrantied. It’ll happen again, just with a different name and maybe next time, it’ll be worse.