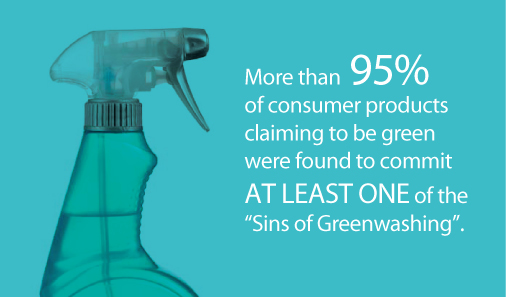 Read the full report at: http://sinsofgreenwashing.org/

I got on a green kick in late 2010. I started phasing out materials in my home and in our skincare. One of the first things I did, was switch my beloved Comet cleaner to a more green scrubber. I changed my Lysol wipes to Trader Joe’s, “Cleanliness is Next to Godliness” spray with a reusable wipe. A few weeks ago, I picked up Seventh Generations’ Disinfecting Wipes, after falling in love with all their other products.

Opening the container today, to clean with it, (as we finally were out of the old cleaners,) and my nose was assaulted by a smell I can only describe as, “vomit-inducing.” The plastic container, smelled like a tire factory, with burned rubber and chemicals. How could this be? It was, “All natural.” They claimed it was the smell of “lemongrass and citrus.”

I did some research. It turns out the main ingredient is Thymol. I googled Thymol and I couldn’t believe my eyes. It was an additive in cigarettes. It has an MSDS data sheet that states a few scary warnings:

Potential Chronic Health Effects:
The substance is toxic to mucous membranes. The substance may be toxic to
kidneys, liver, central nervous system (CNS). Repeated or prolonged exposure to the substance can produce target organs
damage.

Special Remarks on other Toxic Effects on Humans:
Acute Potential Health Effects: Skin: Causes skin irritation with possible burns. Effects may vary from mild irritation to severe
destruction of tissue depending on the intensity and duration of the exposure. Eyes: Causes eye irritation and possible
burns. Effects may vary from mild irritation to chemical conjunctivitis and corneal damage depending on the intensity and
duration of the exposure. Inhalation: Causes respiratory tract irritation with possible chemical burns to the respiratory tract.
Aspiration may lead to pulmonary edema. It may be absorbed into the blood stream and cause symptoms similar to that of
ingestion. Ingestion: Causes gastrointestinal tract irritation with abdominal pain, nausea, vomiting, diarrhea and possible
burns. It may affect behavior/central nervous system/peripheral nervous system (somnolence, headache, weakness, fatigue,
lethargy, nervousness, agitation, dizziness, talkativeness, convulsions, spastic paralysis, sleepiness, insomnia, ataxia, coma),
respiration (dyspnea, respiratory stimulation,tachypnea), cardiovascular system (hypotension, dysrhythmias). It may cause
kidney and liver damage, pallor, profuse sweating, Chronic Potential Health Effects. Skin: It may be absorbed by the skin
and cause systemic effects similar to acute ingestion. Ingestion and inhalation: Prolonged or repeated exposure may cause symtoms similar to that of acute ingestion and inhalation. It may also affect metabolism and cause weight loss.

How can something “natural” have such a list of issues and it’s own MSDS data sheet? It turns out, almost ever natural product comes with it’s own warning and Thymol is not alone. Thymol underwent it’s own testing and was found to be safe in small amounts by the FDA and EPA. I’ll remind you that the FDA found BPA safe until earlier this year and still finds nothing wrong with MSG.

Thymol is an essential oil that is extracted from thyme and mandarine and tangerine oils and is FDA approved when used as a synthetic flavoring (21 CFR 172.515), a preservative, and indirect food additive of adhesives (21 CFR 175.105).

Sure, Seventh Generation will tell me that it’s only a minute amount of Thymol. But if used daily as suggested, and on children’s toys, (especially with infants who place things in their mouths,) this could be a larger issue. In our everyday lives we come into contact with millions of things are bad for us. As a cancer patient and survivor, I try to limit my exposure and that of my children. But these are the wipes I used on my children’s toys, our bathroom. My hands after being washed 3x already, still smell like Thymol. When I did some more research, I found that Thymol was not allowed in San Fransico childcare centers after being tested as a replacement for bleach cleaner. This is what the San Francisco Asthma Task Force had to say:

“Products were chosen that were not associated with other negative health orsafetyimpacts,such asrespiratory
irritation fromodor orscents. For example, the Task Force has not endorsed anythymol-based disinfectants
orsanitizersto date primarily because of feedback obtained from115 child care workers at eleven child care
centers who field-tested a thymol-based food contactsanitizer over a 1-2 week period during the pilot project.
Of the 115 respondents, 62 (54%) reported the scent as being bothersome and when they answered the
question:“What do you like least about the product?” 69 (60%) of the workersindicated odor,scent orsmell.
Additionally, 40 (35%) indicated that they would not recommend that their center purchase the sanitizer due to
the scent. Thirty-five individual workers(30%) reported that using the sanitizer resulted in at least one of the
following adverse health effects: headache (19); nausea (8); irritation skin (6), respiratory(5), eye (4); feeling
allergic (2); and dizziness(2).”

This is exactly why I started going down the “natural” path. Our world of product marketing, is ever-changing. Marketing agencies and companies alike are striving to find the next trend. However, people aren’t educated about the risks of what lies within the cleaning bottle. I found this blog by Seventh Generation titled, “It’s time for limits on toxic chemicals.” Ironic, no?

“At Seventh Generation, we’ve always helped you protect planet home by formulating products that are safe for you and the environment, and by fully disclosing ingredients on our labels. But dangerous chemicals still lurk in our homes, in many of the products we use every day. It’s time for common sense limits on toxic chemicals.“

Awkward.  Did you know that Seventh Generation doesn’t have to put what the “other ingredients” are in it’s bottle? Really, no company does. You would think that companies were mandated to display exactly what was in the bottle. Not in some cases. In 2009, Seventh Generation was called out by the NAD and the BBB for making false advertising statements in claiming there were no, “harsh” chemicals in their products.

I couldn’t stop digging. The agency that the EPA and FDA rely on to provide information, “ECOLOGO” was started with the Canadian government and TerraChoice. (who was just acquired by UL.) Terrachoice claims, “TerraChoice, North America’s premiere environmental marketing agency, helps grow the world’s most sustainable companies.” Terrachoice, was a for-profit marketing company with past clients and partnerships including: Environment Canada

We’re relying on safety information from a for-profit marketing company? They are accredited by agencies, but I found it all, very strange. To make matters even weirder, TerraChoice published, “The Sins Of Greenwashing,” a 2010 report about green companies that were vague or downright lying in their labels. You can see the report here.  The report a finger-pointing diatribe about the need for people to “research” green companies. No, there’s no conflict of interest, here.

Back to Seventh Generation. I cannot literally get the smell off my hands or my bathroom counters. For someone with a sincere heightened sense of smell, this is sensory hell. I washed, lotioned and I even took the old trick of rubbing my aluminum stone across my hands to rid the smell. Nothing is working. My hands still TASTE medicinal. Ick. But, as awful as the smell is, it’s still better than cleaning with ammonia or bleach.

This is what finally pushed me over the edge to try, The Honest Company. I’ll keep using my other Seventh Generation products. (Their, “Free and Clear” Dishwashing Detergent is the bee’s knees.) However, I’ll be looking closer before I buy. Just because it’s natural, doesn’t mean it’s good.