{Parody} Well, crap… this is awkward

While I’m normally running around with multiple client projects, a soon-to-be first grader and a child waiting to be born, this week I have absolutely nothing on my plate, other than giving birth. The house is clean, we’re excited and I possibly have- for the first time in many years, too much time on my hands. Baby Daniel, you are way overdue. Apparently, I am running for office...

This afternoon, when Facebook suggested that I friend, “myself,” I clicked on the profile that featured my photo with an American Flag.  There I was, apparently revving up my 2012 campaign, because of course, I had time for that, too. The first thing that went through my head was, “someone stole my photo, again.” Weekly, I’m alerted to spam that’s ganked my profile photo for one reason or the other. While once I went an entire 3 months without incident, it has become the most bizarre part of the online world. I’ve blogged about the DMCA process, or asking social networks and online websites to restore the original rights to photos that were not used with consent. In effort to alleviate my photo being used, I watermarked my Twitter profile photo and made my Facebook profile completely unsearchable, as well as locked-down for anyone not in my close-knit friends circle. I’ve written step-by-step guides to protecting yourself online as well as spoken nationally about privacy. Wouldn’t you know, I’d learn a lesson and miss a huge loophole.

Enter Google Images. Did you know that you can search for your image and see who else may be using that same image? Be not afraid, but Google has image-recognition technology. When I click on any one of my headshots after doing a Google image search for my name or username I see an option that’s almost hidden to the right-hand side. It’s called, “Search By Image.” 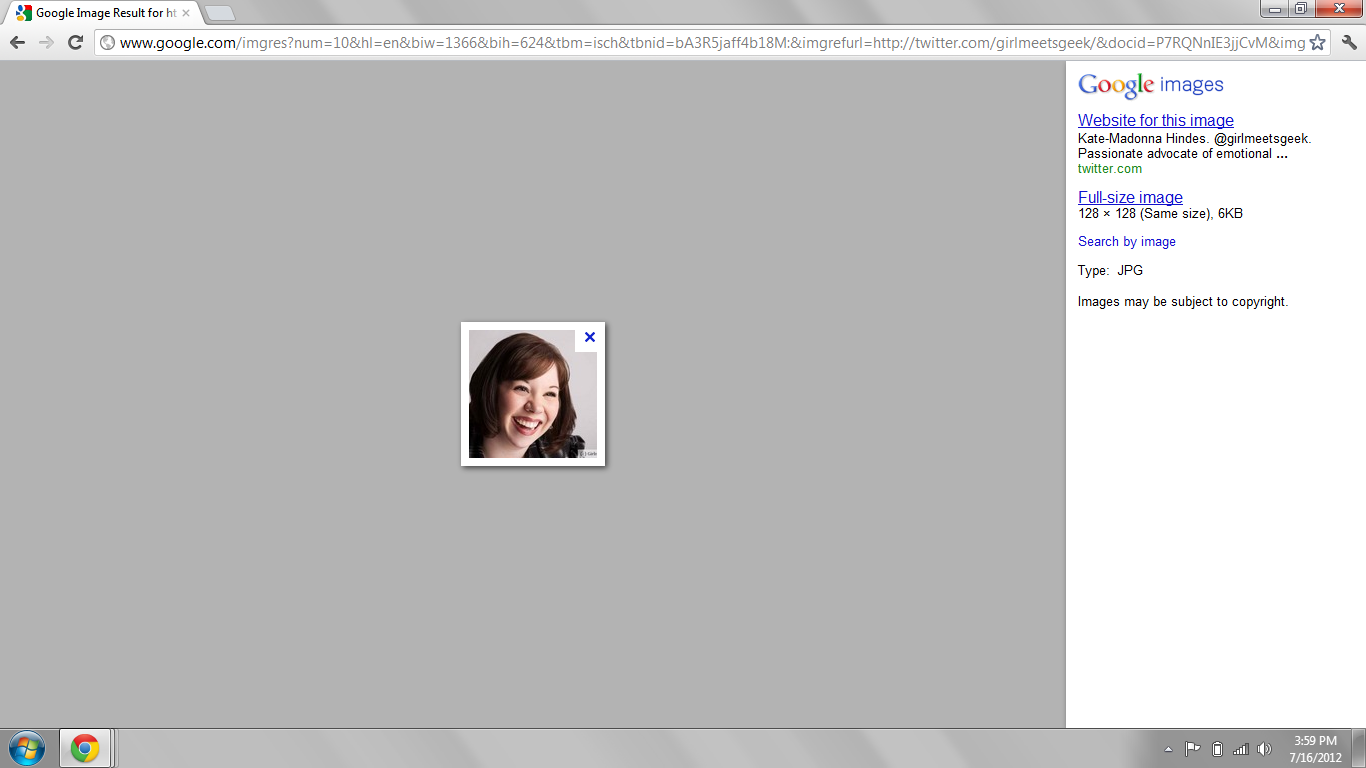 Look to the right hand side where it says, "Search By Image..."

When I searched for the image, websites came up that had used my photo, whether by linking to it, or otherwise. After a search for “Kate Hindes,” “Kate-Madonna Hindes” and “GirlmeetsGeek” I decided to search for “Kate Hinds.” Low and behold, my image came up next to the Facebook post that had taken my image. I didn’t intentionally spell my own name wrong, what happened? Turns out, a well-known cancer publication I had contributed to had misspelled my name to, “KateHinds” when uploading my headshot. These things happen, I was surprised there wasn’t more photos with my last name misspelled out in the black hole of Google.

What I couldn’t believe, was that someone would actually take the time to search for “Kate Hinds” pick up my photo and then photoshop an American flag in the background. (Pretty well done, I might state. Their photoshop skills far exceed mine… but that’s not saying much.)

Could this be for another Kate Hindes? I knew of Kate Hinds, from NYC that writes for Transportation Nation, perhaps they meant her? I even went to school with a Kate Hinds that was a few years behind me; surely it was her, but it didn’t explain my photo.

For this exact reason, about 5 years ago I claimed my middle name as my first-name. Less confusion, right? Plus, there was another Kate Hindes who really hated that she received my email. It was time to act. After I saw the photo, I filed a Twitter DMCA Form and then a Facebook DMCA Form as the picture they were using is my original image, (taken by Noah Wolf photography. He’s incredible.)

Pro-tip: Bookmark these links as both Twitter and Facebook’s DMCA forms are hard to locate.

At this point, I had literally had my fill of DMCA requests and having to go through the process for others to not use my image instead of their own. (To tell the truth, everytime it happens I feel a little more violated.) A year and a half ago, someone snapped a photo of my face- (highly photoshopped) in an Indian ad. That’s when I really started locking my social networks down. Sadly, as I dug deeper, I realized this was no mistake. My name was intentionally miss-spelled, (perhaps to keep me from seeing it? Or because it’s way cooler without the ‘e?’) And the people behind the Facebook profile had even more in store for me. It was like Christmas came early when I clicked on a Twitter profile that was in the “about” section of Kate’s Facebook page. There I was again… with a LOT of tweets.

Seriously? People have time for this?

Someone had created a Twitter profile, (@ItsKateYouGuys,) posted daily and used my photo. While the Facebook profile had minimal posts, the Twitter profile had been active since September 27th, 2011, while the first tweet wasn’t until December, 2011. Someone else must be on maternity leave, right? Who has time for posting fake profile photos and fake tweets?

Whomever made it, sat on it and then? Started filling it with parody tweets of someone named, “Kate Hinds” traveling across the world and speaking. Which, ironically, I was doing at that exact time from Washington, D.C. to Colorado. At first, looking at the timeline of Tweets and older Facebook statuses, I thought, “Get my photo off here!” I never once thought that it as connected to me, besides the picture, (which was alarming enough.) Most of the time, the tweets were a pun. Sometimes they were even funny. (I blame inheriting my father’s sense of humor that I actually laughed at this.)

Could I use these in stand-up? What was this about? Someone who loves puns, decided to make an entire Twitter and Facebook profile about puns and post to it for almost a year. That’s exactly what I thought until I called a friend, we looked through together and we scrolled down. Then I noticed @EmilyRoenigk, who had retweeted a few posts before they even went live, to which @itsmekateyouguys retweeted Emily. That only happens if you’re managing the account or know the tweet is coming up. Who the heck was Emily Roenigk? And why is she retweeting, tweeting and connecting with fake me?

Emily must be really, really, bored, too.

She looked nice. Maybe she shared my father’s penchant for puns? She sure used the hashtag, #YouGuys a lot… maybe Emily mistakenly just grabbed my photo, chose a weird name and went to town with hilarious posts, all while using a Bible verse as her bio. No one who used a Bible verse as their bio was a mean person, right? Emily wasn’t connected to anyone else I knew, but her connections and @ItsKateYouGuys’ connections shared a lot of the same people, including, @SirJakeGrimes. She also knew someone local, @Trusse6. The Jake Grimes account seemed to be another parody. Could I have stumbled across a secret, elitist world where young, college and high-school Christians mock fake or real people online? Judging by both their followers, that’s who follows the accounts and retweets. I shrugged it off until I saw this, which mentioned exactly what I often spoke about, in  my own home town. But this was posted when I was on-air only a day before speaking about Race For The Cure and Komen’s evil antics. I had just gotten back from the State of the Union in Washington D.C., photographing Cancer Day On The Hill and speaking on Capitol Hill. What were they trying to say?

We figured out at this point that it might be personal with all the Minnesota Tweets. But then again, the other Kate Hinds that I attended school with, was from MN, too. Which was a bummer, because Emily seemed nice and so did her friends. Perhaps I had met Emily in a past life and really, really made her angry… or maybe, Emily is a fictional character as well. You never know, online.

Basic twitter philosophy tells us when we create a page? We follow those we know and when we constantly re-tweet, call out a profile on our own profile, it’s probably because we’re connected. But just in case, I’ll give Emily, Tommy and the rest of the team, the benefit of the doubt. Magical unicorns made a twitter profile and facebook profile. My life-long wishes have now come true.

To thank all those who’ve retweeted and especially Emily and Tommy, I  wanted to host an event to let them know how special they are. I feel really, really, lucky…. you guys.  Kate Hinds for 2012. Just don’t spell my name correctly, and use a lot of puns, okay?

Emily is a real person who likes to make puns and rhyme. She’s from Minneapolis and “made up” the name “Kate Hinds” without ever knowing there was actual Kate Hinds’ in the world. She really likes ketchup, which is awesome… because who doesn’t like ketchup?

I asked Emily's permission to use this photo. After laughing so hard I cried, I realized the world is much smaller than we realize.

Besides being a PR major, she’s actively involved in YoungLife, (a Christian leadership group.) While we remarked about our similarities, (me being a Theology major and doing PR,) my head almost exploded when we found out we had actual people in common. Emily explained the entire thing over Facebook chat while I indulged in my pregnancy craving of a gummy bear sandwich. Emily found me via the event I created and I think, despite everything… it is more hilarious than it seemed in the beginning.

I asked Emily if she knew I was a “real person,” and why she’d take a photo from the web. She responded, “Because we figured you were some stranger that nobody would know, so that when i made the twitter none of my friends would know who she was.” Isn’t that the internet. And kids these days. I talked to Emily for a while and I never received the impression it was more than a harmless activity to keep people busy. I once re-arranged my high school friend’s entire lawn, just to mess with them. I get it. Emily was worried she’d get fined. I explained the DMCA process was different, she’d just have to take the photo down. I gave her some links to avatar-creators. The next Kate Hinds may not be as cool as the first, but she’ll be an original, right?

And that’s the story of meeting someone who picked my name out of a hat, used my photo and is now my Facebook friend. The only problem is, I’m still pregnant. Let’s do this, Baby Daniel….