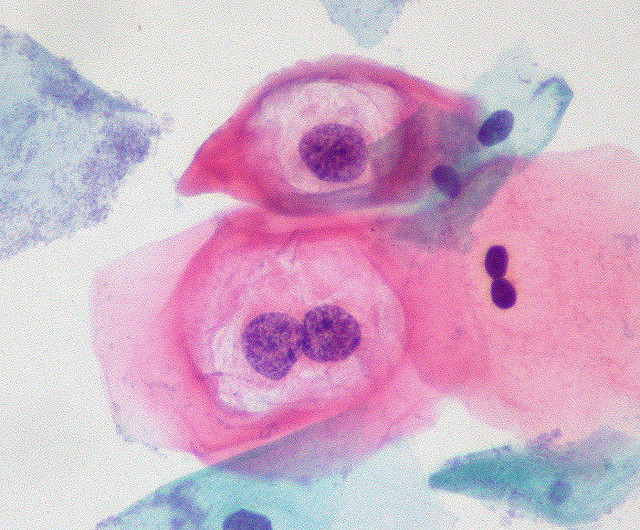 {I have cervical cancer and HPV}

I speak out often about the stigma that is related to cervical cancer and its many forms. The hype of HPV I have is high-risk and is not related to warts or any outward signs. My HPV causes serious dysplasia inside my cervix, which causes lesions, cancer and many more complications, (including infertility, breakthrough bleeding and severe pain.)  It’s not the pain or the fear that I live with most of all, it’s the stigma of this sidelined disease. I have heard time and time again, HPV being marginalized as a strictly-sexual disease, brought on by promiscuity and deviance. I have battled cervical cancer multiple times and my heart is heavy from hearing names from my survivor group of those that have passed on, or entered hospice care. In speaking nationally for cancer organizations and on Capitol Hill, I know one thing is certain, we must stand for a cure while helping to educate others. Recently, Minnesota Women’s Press featured my story in an article, “Cervical Cancer does not define me.”

I started asking questions a few years ago around funding and cervical cancer. I realized, the answers went far deeper than why cervical cancer was a combination of under-tested, under-reported and under-funded. Cancer.gov states in 2010, $76.5M was spent on cervical cancer funding. (In comparison, this is a very small number, given the amount of women and men affected.)

“The National Cancer Institute’s (NCI) investment in cervical cancer research decreased from $83.3 million to $70.8 million between fiscal years (FY) 2006 and 2009 before increasing again to $76.5 million in FY 2010. In addition, NCI supported $14.3 million in cervical cancer research in FY 2009 and 2010 using funding from the American Recovery and Reinvestment Act (ARRA).” (Source: Cancer.gov)

I realized only a short-while later that the golden ticket answer wasn’t in cervical cancer funding, (although important,) it was in HPV funding. In fact, did you know, HeLa cells were directly taken from Henrietta Lacks, a woman with cervical cancer and HPV? Because of Henrietta’s disease and unknowing sacrifice, many studies became available, including Leukemia, Influenza and numerous vaccines have been developed to help the world’s population. (An infographic from Wired.com shows the incredible uses of the HeLa cells, controversy withstanding.) With the rise of certain types of cancers, it’s hard to understand why the CDC and cancer.gov continue to report that “most cases of HPV go away on their own.” If this is true, how could the cancer statistics be so high, when in direct relation to the HPV virus? You could say, I’m fascinated by the lack of respect HPV is given, especially due to the devastation it is causing in America, alone. This is not to mention the complete misinformation that is scattered about HPV-related cancers being, “rare.”

Also, there is a SIGNIFICANT lack of credible information about HPV and cancer on the web. One of the biggest perpetrators may surprise you. The American Cancer Society can’t even identify cervical cancer correctly, calling it instead, “cervix cancer.”  The whole article on their site had my head spinning. (But yes, please give them more donor dollars, because they are obviously doing such a great job.)

The most powerful statistic I’ve seen is just in the continental US, (where HPV is widely under-reported and under-diagnosed, especially in minority-populations,) that 20 MILLION men and women are currently  infected with HPV.

“Thanks to HPV, just about everyone has a sexually transmitted infection these days. About 20 million Americans are currently infected with one or more strains of the virus. Six million more are infected each year. If you have sex, you’re more likely than not to get it before you die. Forty percent of women will contract it within just 16 months of their first vaginal intercourse. And the virus’ proliferation has complicated Americans’ moral judgments concerning sexual activity. The ubiquity of HPV has democratized sexual stigma—the virus infects people of all races, classes, and sexual orientations. If contracting a virus from sex is the norm, it makes it more difficult to dismiss people with STIs as moral degenerates or irresponsible sluts.” {Source: Good.is}

{Perspective On Funding and Related Cancers}

I wanted to put into perspective how much in funding was given to diseases and how many people currently living with different diseases were infected, considering that each year 12,000 women are diagnosed with cervical cancer, alone with over 4,000 dying. My guess before spending the last few weeks combing through data was that HPV would have the smallest amount of funding, with some of the largest numbers of those infected. Who is receiving cancer funding from the NCI, (National Cancer Institute and Cancer.gov?) Here is an abbreviated list:

As you can see, both Lung and Colorectal cancers were high on the list. However, Cervical Cancer and other HPV-related cancers, (specifically the more “sexually-viewed” ones,) were quietly left to fend for themselves. Cervical Cancer, and HPV are an after-thought to the sexualized “breast” cancer phenomenons, (don’t even get me started.) The above numbers seem alarmingly off, when 20M people have the HPV virus, which directly leads to over 10 types of cancers, (just that we know of.) The statistics surrounding HPV are sobering. With over 100, different strains, HPV can compromise the immune system and according to cancer.gov, the disease can hide for over a decade within the body.  In fact, cancer.gov cites the following number of cancers are caused by HPV:

{Let’s Do Some Math}

With all this information, (and so much still left uncovered,) it’s alarming to know why so little funding is going to HPV and what minuscule amount is allotted towards vaccine development, is controversial in nature. So how much is going to HPV? I could not find ANY hard numbers to the direct funding sources for HPV, itself. Could it be because cancers deemed, “less sexy” and “less deserving” of the public’s money are silently less-funded than their non-sexual, and “blamed” counterparts? Because HPV is spread through genital contact, (among other ways,) many might feel uncomfortable giving to a disease that people, “chose,” especially given the lack of true information on many websites and pamphlets. Why do the words, “sexually active,” automatically blame those who contract a virus? Assuming most, (if not all,) of the population of the United States IS sexually active, (marriages and long-term relationships included,) the statistic which states, “75% of all sexually active people in the US will have had genital HPV infection,” should create a ripple effect, right?  Or, so one would think. The main problem with HPV funding is the lack of true research on the disease, and the political machine Gardasil has become. HPV has become its own case of controversial warfare, where funding is withheld for political profit. Look no further than the debate on Planned Parenthood and HPV screening. Some politicians view Planned Parenthood as an abortion provider and nothing else. Whereas, the non-profit actually offers hpv screening and treatment to the often under-served populations and rural towns in the U.S. Instead of identifying cancer early, many without insurance go without tests or treatment, while non-profits are simultaneously attacked for helping, “promiscuous women.” Slut-shaming is a very real problem that today’s women face. As you can see, a trifecta is occuring between politics, funding and women’s health. If we don’t fund HPV research and cure methods soon, many more lives will be lost.  The number is literally, incalculable.

You can take a stand by getting your yearly PAP smear. If your test comes back abnormal, please ask for an HPV test; the results may surprise you. Whether diagnosed or undiagnosed, you can keep most symptoms at bay by making healthy lifestyle choices: Yearly paps to diagnose, follow-up care, eating healthy foods and getting adequate rest. These are all things I speak about when discussing HPV. We are not anomalies and we can’t continue to believe that HPV and cancer happens to everyone else and not ourselves. Arm yourself with education about your risk and discuss fears with your physician. Most importantly, never be afraid to seek a second opinion. Our health is far too important to leave to the hands of someone who doesn’t know our bodies as we do.

You also have the ability to raise your voice on Twitter, Facebook and Social Media by reminding others about HPV and its devastating effects. Let your voice be heard by dialing, writing or speaking to those in political office in your area. Let your legislators know that women’s health is not simply a birth control or abortion issue, but one of human rights. While other cancers are funded at eyebrow-raising levels, (where’s the cure?) Most HPV-related cancers are hushed because of their connotation. Remember, 75% of us have HPV in our bodies at any one time, (current statistics from the CDC and NCCC state that number is as high as 85%.) HPV doesn’t “go away on its own,” it simply infects and then lays dormant. The virus never ultimately leaves your body once infected. This and many more reasons are why HPV funding is so important, now just for cervical cancer, but because this disease is affecting our population like no other.