{Truth} You Will Be Nothing Unless You Bare Your Soul…. 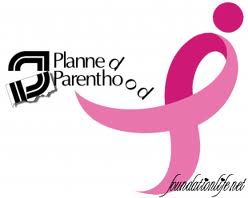 “Planned Parenthood today expressed deep disappointment in response to the Susan G. Komen for the Cure Foundation’s decision to stop funding breast cancer prevention, screenings, and education at PlannedParenthood health centers. Anti-women’s health groups have repeatedly targeted and boycotted the Susan G. Komen for the Cure Foundation for partnering with Planned Parenthood to provide these lifesaving cancer screenings and news articles suggest that the Susan G. Komen for the Cure Foundation ultimately succumbed to these pressures. As a health care provider to more than 60,000 women in our community, Planned Parenthood is trusted a leader in helping women identify breast cancer early. Women are deeply alarmed that the Susan G. Komen for the Cure Foundation appears to have succumbed to political pressure from a vocal minority”, said Sarah Stoesz, President and CEO of Planned Parenthood Minnesota, North Dakota, South Dakota (PPMNS). “For years, opponents of women’s health have waged an aggressive pressure campaign aimed at the Susan G. Komen Foundation at the expense of women’s health and lives. While not directly affected by the Komen Foundation’s decision making, PPMNS is deeply concerned about the troubling precedent of putting politics before women’s health. Last year alone, PPMNS provided 15,244 breast exams and screenings to women in the region who may not have otherwise had access to health care that would help them detect breast cancer early. In these tough economic times, more women than ever need access to essential health care services like lifesaving breast cancer screenings. Politics should never get in the way of a woman’s ability to access health care,” said Stoesz.

NPR did an incredible follow-up Q&A that asked difficult questions surrounding the decision including numbers around the initial donation amount and follow-up donations to make up the gap. MS. Magazine, along with Breast Cancer Action pulled no punches, just the truth when revealing the underhanded motive that some believe Komen has.  The Atlantic has reported that a top Komen executive has resigned over the decision to cut funding to Planned Parenthood. Having been on-air with radio, television and writing numerous articles about Komen, I’ve been all too aware of pink corruption.

{What Is Komen Thinking?}

It’s always been how Komen has visualized Breast Cancer with pink, happy, feather-boas… but I cannot shake the pink disgust and sexualization of cancer. I carry the gene and am fluent about checking monthly and visiting my gynecologist regularly. I beat cancer with my cervix and I abhor how women’s cancers have been overtaken by one, single, color. On-air, online and in print I speak passionately about defying the ideology of the PINK and making our own decisions. Komen pulled support for a program that helped the underserved and rural populations that Planned Parenthood wasn’t able to reach. With the government consistently cutting funding to regional and local Planned Parenthood clinics, (5 in just 2011,) it’s clear that the money given to Planned Parenthood was needed. More so, reading for just a few moments on WomensHealth.gov, signals a direct increase of minority cancers and death with one risk factor being early diagnosis and prevention. There is a war on health in our nation and making healthcare affordable, accessible and manageable. No one can dispute that. What many pro-life organizations do try to dispute is Planned Parenthood’s relevancy in today’s market. Two myths are prevalent and taught among these organizations.

1.  Abortion causes Breast Cancer. Debunked many years ago, even Cancer.gov testifies that abortions have NO effect on breast cancer risk factors. In the study it’s stated “having an abortion or miscarriage does not increase a woman’s subsequent risk of developing breast cancer. A summary of their findings can be found in the Summary Report.”  Source: Summary Report: Early Reproductive Events and Breast Cancer Workshop

2. Abortions are mainly a way for minorities to eliminate pregnancy.  Guttmacher has some staggering statistics on abortion. Most interesting to me, is the breakdown of equality among nationalities who decide to get abortions and the reasons for terminating a pregnancy.

• Non-Hispanic white women account for 36% of abortions, non-Hispanic black women for 30%, Hispanic women for 25% and women of other races for 9%.[6]

• Forty-two percent of women obtaining abortions have incomes below 100% of the federal poverty level ($10,830 for a single woman with no children).[6]

• Twenty-seven percent of women obtaining abortions have incomes between 100–199% of the federal poverty level.* [6]

• The reasons women give for having an abortion underscore their understanding of the responsibilities of parenthood and family life. Three-fourths of women cite concern for or responsibility to other individuals; three-fourths say they cannot afford a child; three-fourths say that having a baby would interfere with work, school or the ability to care for dependents; and half say they do not want to be a single parent or are having problems with their husband or partner.[7]

• Exhaustive reviews by panels convened by the U.S. and British governments have concluded that there is no association between abortion and breast cancer. There is also no indication that abortion is a risk factor for other cancers.[12]

{The Reality of What Planned Parenthood Offers}

Let’s look at the breakdown of Planned Parenthood’s services, (collected from their most recent reporting numbers. Available here.)

Cancer Screening and Prevention — 14.5 Percent of services in 2010

Other services (Includes, Family Practice Services, Adoption Referrals to Other Agencies, Other Procedures.)— 0.6 Percent of services in 2010

This morning, while scrolling through my twitter feed I saw someone state, “Get over Komen/PP. Move on.”  I sat for a while and decided if it warrantied a reply, or anything to give it more validation than was deserved. I replied carefully, though my fingers and mind told me to do otherwise. I tweeted, “Every time someone says, “It’s time to shut-up about the Komen/PP thing,” I say, “That’s how they win.” A cause isn’t a one-time statement.” When you believe in something as I believe in healthcare equality, you don’t ‘shut-up.’ Last year I was invited to speak on Capitol Hill and address our current Congress and Administration on misleading guidelines and the cost of care. I was featured in Planned Parenthood’s newsletter not so long ago. As a woman who had a pre-existing condition of cervical cancer and couldn’t afford $3-5k for single treatments to her cervix. Planned Parenthood made my treatment affordable and offered me a place when my insurance refused to pay for anything with my cervix. I am a healthy 30 year old caucasian woman in a metro area. If I was a minority woman in a rural area, I might have not been able to FIND prevention or treatment without a local Planned Parenthood clinic. In fact, minorities are screened FAR LESS for cancers by their physicians or emergency care than their caucasian counterparts.

“Among subgroups, Asians were found to be the least likely to be screened for breast cancer (64.1%), compared with Hispanics (69.7%), African-Americans (73.2%), and whites (72.8%). For cervical cancer, Asians also led the decline with 75.4%, compared with 78.7% for Hispanics, 85% for African-Americans, and 83.4% for whites. People with no health insurance or those relying on hospital emergency departments for medical attention were only 36.2% likely to get tested for breast cancer, and 64.9% for cervical cancer. By comparison, the percentages for people with regular access to health care were 75.4% and 86.4%, respectively.” –  Forbes.com

{Not A Pro-Life / Pro-Choice Issue}

When we fail to meet care guidelines for each demographic, we fail to properly adhere to a model of equality, no matter race, class, sexual orientation, religious belief or otherwise. And frankly, we are failing. I’m not here to write about pro-life or pro-choice mentalities. I truly believe that no one wants to have an abortion. The mental anxiety and anguish and subsequent judgement is noted by every woman who walks into a clinic to discuss or have the procedure. The fact is, Komen’s refusal to support Planned Parenthood goes much deeper than a pro-life / pro-choice debate. It goes to the heart of WHO the Susan G. Komen Foundation is and eliminates any belief in my mind of their motive to slowly take over the face of women’s health at any costs. Komen has proven their irresponsibility to women’s health in far greater ways including*:

Refusing to invest in environmental factors that lead to cancer – Source

*Although I’m aware of all the above, I specifically picked sources from simply using google with the phrases and keywords above.

When I taught Keith Ferrazzi’s masterclass, I said, “You will be nothing unless you bare your soul.” For our healthcare system and equality to change, our voices are needed now, more than ever. Even if you are unsure where you stand in the Komen / Planned Parenthood debate, educate yourself about what is at stake and Komen’s choices. You can visit Breast Cancer Action, Think Before You Pink, Pink Ribbon Blues and others. A few of my past articles and podcasts are below.

Article: Re-Think Your Pitch: Q&A With A National Brand Over Sexualizing Breast Cancer – 2011