{*Author’s Note: This post uses quotes and photos from various sources that may be upsetting or offensive to those who have gone through any form of cancer. The more I investigated the charity, the more shocked I was at how far this organization was going to go. Please proceed with caution.}

I received a very strange email a few days ago. Press Invites/Releases make up about 30% of my email inbox. Often, I’ll do a skim and delete, or I’ll contact the sender for more information.  The pitches are usually meaningful and as a journalist, I appreciate the time a decent release takes. However, the heading on this one truly was hard to miss.  You can read the entire press release here: http://www.girlmeetsgeek.com/reverb-media-press-release/. 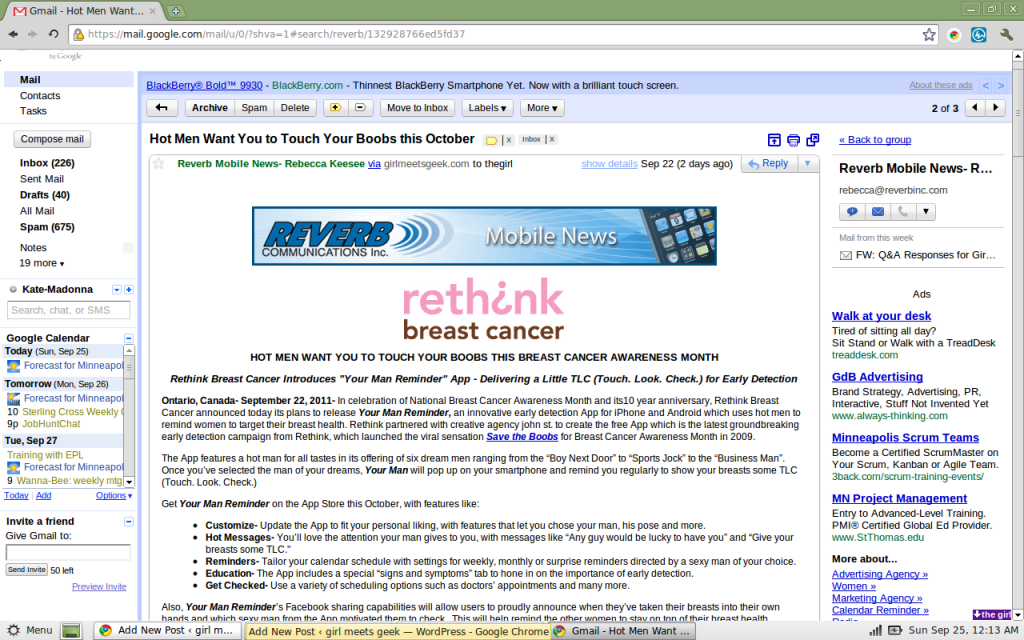 The first thing I did was to check the sender, (Reverb Media) and make sure that someone hadn’t accidentally hacked their account. About 3 seconds later it dawned on me: Someone is actually using this headline for Breast Cancer Awareness Month. I found out it was a phone app that reminded you to be screened for breast cancer, with ‘hot men.’ That’s it. Three things immediately went through my head:

2.) Can you imagine a masectomy survivor reading this and knowing that yet again, someone else is trying to push breast cancer only involving the… breasts? Can you imagine her outrage wishing that she still HAD her breasts?

3.) They must be joking. It must be a catchy headline, (worked for me!) I’ll open it, a heartfelt apology will flow and they will be donating a huge amount to a well-known organization.

“No matter the cancer, we should be supporting those left picking up the pieces.  Pink products, small ribboned novelties and otherwise fantastically-marketed crap really do nothing for women who are battling their fears, bodies and for the rights to a cancer-free-life.  Until the world finds another way to develop a cure, I’ll speak out on #PinkWashing, coined from my friend @RickBert.” – Kate Madonna Hindes

I decided to dig deeper. The release was crafted by to entities: John St. and Reverb Media. I’ve heard of John St. and have a lot of respect for their craft, unfortunately that’s no longer the case. I’ve also heard of Reverb, most recently because of their 2010 lawsuit claiming that they falsified reviews in the Itunes Store for profit. And I’ve heard of the ‘non profit’ behind this newest push for prevention. Know those “Save The Boobs!” bracelets that are in the news for the ACLU lawsuits and schools banning them? That’s these guys: RethinkBreastCancer.org. One click on their website tells you exactly what their after. In fact, in the press release itself, under “Save The Boobs!” the link pulls up a youtube video. After I sat with my mouth gaping open, I decided to screenshot this gigantic mess in its disgusting, man-centered glory. For those that are easily offended, I recommend you don’t click play on the video below. If you’d like a play by play on the video and their falsified statistics, visit here.

I asked for a few questions to be answered about the mobile application the press release was pitching. The following is the completely unedited Q&A  I engaged with the organization:

1.) Why did you choose a phone app instead of ipad?

2.) Since this is launching to women, (young and old,) do you have any concerns over the ‘sexualizing’ of the disease that has been written up recently in Forbes, the NYT and the Washington Journal?

3.) Although early detection is important, there are many other factors that can save lives such as environmental, genetic, etc.

4.) How does this engage with the survivor population?

1.)“As ‘Your Man Reminder’ is the first Rethink Breast Cancer App we wanted to focus on iPhone and Android, as they are mobile devices that women carry with them at all times.  iPad, and other tablet devices, are certainly a great way for us to reach women with our early detection message and its definitely on our minds for Phase 2!”

2.) The use of “hot guys” as a reminder for women to be breast aware is actually a clever twist on the typical sexualizing of the disease. This is not the usual “booby” campaign that is emphasizing women’s breasts as sexual objects. Both approaches, if done with humour and sensitivity,  can bring attention to early detection and help save women’s lives.

3.) Although early detection is important, there are many other factors that can save lives such as environmental, genetic, etc. The app is one of a host of Rethink Breast Cancer’s education tools and resources, including ones that focus on risk reduction through lifestyle changes. In our efforts to empower young women, Rethink encourages women to know their risk for developing breast cancer as well as strategies to reduce their risk and to be breast aware and know the importance of early detection. The app is a great example of one of our bold efforts to help young women take charge of their breast health.

4.) How does this engage with the survivor population? Many breast cancer survivors (of all ages) have embraced our creative, and sometimes irreverent, education and early detection initiatives. Many of the young women in our breast cancer support programs are excited about this app and will help us spread the word about it through social media. They think it’s critical that young women know their risk for breast cancer and believe this app can break through the clutter of young women’s busy daily lives and help take some of the fear out of using early detection methods.

It was the question to #2 that immediately stopped me dead in my tracks. This particular sexualization and including men is just a “clever twist.” So what does it app do? A few good – looking men remind you and your girlfriends to get screened and participate in early prevention of the disease. Which frankly has been done better by just about every, other campaign out there. To speak to younger women Ms. DeCoteau, you don’t need hot men or a history of sexualizing the population of MTV video watchers, (who smoke, drink and take birth control: all added risks to Breast Cancer you don’t discuss.) When you equate beautiful breasts to beautiful women and breast cancer to fear, you in fact are telling young women: “All that matters is that you look great in a bikini, get checked!”

Creating hot and ‘cutting-edge’ ads over a very deadly disease has it’s risks and unfortunately in today’s day and age: no longer works. We know breast cancer exists. Komen has partnerships with major drug companies that also manufacture known carcinogens in pesticides. The Yoplait “Lids for a Cure” campaign was busted after it was found that Yoplait uses RGBH in their yogurt: a known breast cancer causer. Komen’s own perfume, “Promise Me,” has ingredients that cause breast cancer. Why are we still investing in prevention when the cure is right under our nose? The true reason? Cancer is profitable.

One thing is certain, ReThinkBreastCancer is not afraid to pack the ‘sexy’ punches behind the disease, but they do seem to be afraid to tell the true statistics. Judging by their latest 2010 financials, they’ve been wildly successful. CharityNavigator.com has no record or account of their non-profit, which might be because they are a Canadian charity, I just have two questions: Should we protect women, or just the breasts? Where’s the multi-cultural representation within their ads and website? (African American women make up the largest number of breast cancer deaths, though on Rethink’s website, I had yet to find one African American woman.) If we’re only protecting breasts before they’re gone, what happens to those who have lost their breasts? In today’s society of ‘sex sells,’ are we setting young women up for failure to maintain their sense of self-worth after cancer? Someone please, wake me up when October ends. Surely the survivors and those that have passed away from breast cancer deserve so much more than these poor attempts at ‘prevention.’ It’s time for a cure.

Gayle Sulik is a pioneer in defining the sexualization of breast cancer awareness. You can read her pieces here: http://gaylesulik.com/2011/04/boobies-i-said-it-now-may-i-have-your-attention-please/